Reel vs. Real 🤪 Our crazy family is about to get bigger.

7.17.19 Papa. You never really left. I feel your energy in every book that you left in my care. The boy in my womb will be born into this wealth of literature. May I be able to pass down your unending romance with books to your grandchild. Overwhelmed but Hopeful. ~Lara Serena~ Photography: @stephenpechon of @niceprintphoto Art Direction & Design: @rabbitholecreatives Styling: @john_paul_dizon Style Associate @gui_alapan Make Up: @dinolazaro Hair: @evanzevaristo Location: My Father’s Magical Library

As with any pregnancy, Chynna also experienced some discomfort in her second pregnancy. She recently shared via Instagram Stories that she’s suffering from acid reflux. She even asked her followers to share some tips on how they overcame their acid reflux during their pregnancies. 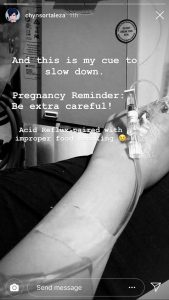 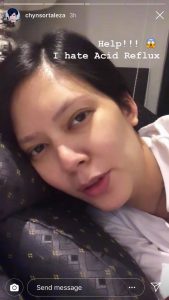 Acid reflux is also commonly known as GERD or heartburn, even if it does not have anything to do with the heart. It is a burning sensation in the esophagus caused by stomach contents that reflux or goes back up. It is uncomfortable and worrisome, especially among pregnant women. One out of every two pregnant women might experience acid reflux during their pregnancy, particularly during the second and third trimester.

What causes acid reflux during pregnancy?

We all know that a pregnant woman experiences a lot of hormonal changes during her pregnancy. Such changes can cause some muscles like the lower esophageal sphincter (LES) to relax. LES is the muscle or valve between your esophagus and stomach. When the LES is often relaxed, more acids from the stomach may seep up or reflux to the esophagus.

How can I avoid acid reflux?

The good news is acid reflux can be prevented. Here are some ways on how you can prevent experiencing acid reflux during your pregnancy: