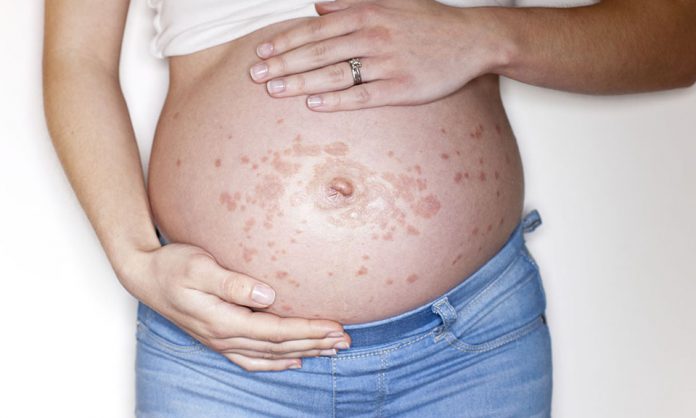 I was around 6 to 7 months pregnant when I woke up one morning with angry, red, itchy hives all over my body. It was in my arms, back, legs, and even baby tummy! I want to say that I dealt with it calmly and as rationally as possible, but that was not the case, because one, I was pregnant and emotional, and two, I immediately realized that I never had chickenpox in my life and if those hives were chickenpox, then I knew it could affect my unborn baby.

A couple of hours later, my OB calmly told me that what I had was not chickenpox, and was instead PUPPPS or pruritic urticarial papules and plaques of pregnancy. So the good thing was, PUPPPS would not affect my baby in any way, but the bad news was I was in for an itchy and uncomfortable third trimester as the only sure cure and resolution for it were to give birth.

PUPPPS or pruritic urticarial papules and plaques of pregnancy is a chronic hives-like rash that occurs in about 1 in every 200 pregnant women. Although it can be extremely annoying and uncomfortable for its sufferers, it does not present any long-term risk for both the mother and unborn child.

The cause is generally unknown, but certain studies reveal that PUPPPS more frequently occur in women pregnant with boys and has something to do with the male DNA interacting with the mother’s body. Another common factor among PUPPPS sufferers is skin distention or stretched skin – with the hives or papules and plaques first appearing within the stretch marks. Thus, it is also common in mothers carrying large babies, twins, and triplets. Although for the record, I had it when I was carrying my daughter and wasn’t considered a particularly large pregnant woman.

PUPPPS can appear like initially appear as small, pimple-like spots in the stretch marks. They could resemble rashes or hives especially when they start to come together and form large, red, plaque-like areas. It usually occurs in the stomach, bottom, thighs, legs, arms, and back, and does not usually affect the face.

PUPPPS can be very itchy, especially during the night. So it could really be a pain especially if you want nothing more than a good night’s rest.

I think I have PUPPPS what can I do?

The first thing you should do if you think you have PUPPPS is to visit and consult your OB. If she confirms that you do have it, then here are a few ways to alleviate its symptoms and somewhat treat it – aside from giving birth, of course:

Steroid creams applied to the rashes can help reduce the itchiness. Although most creams of this type are considered harmless to pregnant women, you should always, always consult with your OB first before using them.

OBs (including mine) also normally prescribe antihistamines for PUPPPS to relieve the itchiness.

Although topical steroids and antihistamines are considered harmless to pregnant women, you should always, always consult your OB first before using them.

Admittedly, I was a bit uneasy about taking medicines when I was pregnant so I only took them when it was absolutely necessary. I tried to bear the itchiness but it was driving me insane, not to mention the fact that I was the walking, literally polka-dot lady with all the angry hives, so I tried to look for other remedies aside from the steroid cream and antihistamines. Here are a few that I’ve tried and worked for me:

I found other moms in Google recommending oatmeal baths to relieve PUPPPS rashes and itchiness. Unfortunately, I don’t have access to a bathtub to do oatmeal baths so I tried using an oatmeal soap I found in an organic shop at the mall. And the good news is, aside from relieving the itchiness, the oatmeal soap also somewhat calmed down the inflamed hives.

The hives somehow give off a warm/hot feel on the skin, so another effective itchiness remedy I did was cold compresses. I kept a few wet towels in our freezer and took one out at a time and placed it over the hives (whichever one was itchy at the time, yes, they took turns) for immediate relief.

The cold compresses were great, but I needed something I can take with me when I’m out and about, and cold towels don’t stand a chance with our tropical weather. I tried out an aloe gel that I found in an organic shop because it felt cool on my hands. I kept it in our refrigerator most of the time, took it with me on my bag whenever I’m out, and applied it whenever needed. The cold gel kept the itchiness at bay.

Another effective remedy for me is diaper rash cream, which I tried out when I saw other moms recommending moisturizers for the itchiness. I figured diaper rash cream is formulated for soft baby skin and it is recommended to relieve itchiness in babies, so it should also be safe and effective enough for my purposes. And it was! I applied it to my inflamed PUPPPS rashes and the redness and swelling subsided, and it also relieved the itch.

A lot of moms swear that pine tar soap greatly reduced their PUPPPS rashes and improved their symptoms. Unfortunately, I could not find a seller in Manila so I couldn’t attest to its effectivity.

Everyone says that pregnancy is a wonderful experience for any woman – but it can be pretty hard to enjoy it if you’re feeling unwell just because of PUPPPS. But in spite of the challenges of the PUPPPS, always remember the primary reason why you are dealing with it in the first place – that you will soon birth a sweet baby into this world. So cheer up mama, PUPPPS is just a minor roadblock in your motherhood journey, and surely, all the itchiness and discomfort in the world will definitely be worth it once you have your sweet babe in your arms.

*Always consult your OB before trying out any PUPPPs relief. What might’ve worked for me, might not be the same for you.