We’ve heard it time and time again in this age of the Internet and smartphones: limit screen time. Kids, especially toddlers, are better off with no TV or gadget exposure. But let’s face it, zero screen time for kids is a tough job. We tried to stick to it, but we admittedly failed. There were times when we just want to sit down to a relaxing dinner out and our daughter has other plans — so out comes our smartphone to railroad her tantrum plans. There were also days when we just need a few minutes off as a breather from her thousand questions per minute and handing her the tablet is the easiest way to do so. 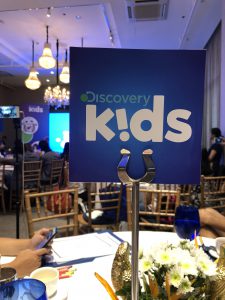 So yes, I’m saying it out loud right now, we’re lenient on the no gadgets rule at home, especially now that our daughter is 5 years old. However, we still try to ensure that she only gets access to content that’s educational and made for kids her age. We limit and supervise accounts she can see and follow in YouTube, but because of what I discovered about it here, we generally prefer apps that are made for kids in mind. Because such apps offer already curated content that’s right for kids — so we don’t have to worry and always keep one eye out if what she’s watching is still appropriate for her age. Let’s face it, try as we might to always watch with her, we still do slip sometimes. Which is why I was happy to learn that Discovery Kids has launched an app in the Philippine market. My daughter and I attended the launch and here are a few things we found out:

The Discovery Kids app is designed to spark curiosity and encourage exploration in kids. So its built for kids and with their needs in mind. More than that, the app has a unique watch-play-learn experience and an intuitive kid-first navigation that’s easy for kids to use. My daughter had no problems with the navigation and she was able to quickly discover her favorites, which leads to… 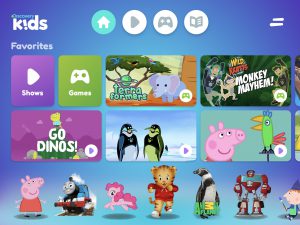 The Discovery Kids app features a specially curated slate of content — including videos, shows, digital books, games, and more. My daughter squealed in delight when she discovered the lineup of My Little Pony and Peppa Pig episodes in the app. I’m sure your kids would love it too as aside from the ponies and Peppa, the app also has well-loved kiddie shows such as Transformers Rescue Bots, Ben & Holly’s Little Kingdom, Insectibles, Oddbods, and Angry Birds Toons. Kiddos who love to read can get their fill with the digital books that feature Scaredy Squirrel and Goodnight Gorilla. The app also gives you access to Discovery’s content such as Cupcake Wars: Kids, Meet the Penguins, How Do They Do It: Kids Edition, and Guess What They’re Making! You can even watch special videos from Scarlet Snow Belo.

The Discovery Kids app will give your child their fill of smartphone games — in a safe place. We were kids before so we know how appealing smartphone games are to kids. However, not all games are appropriate for kids and not to mention, the security and safety issues that come with it (hello Facebook posts from parents regarding popular online games). So instead of searching for and downloading a number of apps, and monitoring the games your kids’ play, get the Discovery Kids app instead, as it also offers a treasure trove of age-appropriate games for your child. My daughter is currently going through an “I love all animals” phase so she quickly zeroed in on games with animals such as Terra Formers (she built a thriving ecosystem) and Coastal Clean Up (wherein she helped a turtle clean up the coast).

Another thing worth pointing out is that the games are designed to promote learning and exploration. For example, the Terra Formers game allowed my daughter to learn about what it takes for an ecosystem to thrive and that in some way, every living species is interconnected with each other. 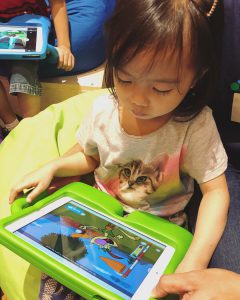 The Discovery Kids app allows parents the option of allowing screen time to their kids, thanks to its safe and enriching digital environment. Jay Trinidad, President and General Manager for Discovery Kids said it best during the launch: “Discovery is driven by curiosity and our Discovery Kids app delivers on that promise, taking the brand experience beyond TV as we continue to innovate with new products and content. Together with PLDT and Smart, we are able to make the service available to kids across the Philippines, bringing them good fun in a safe and enriching digital environment.”

The Discovery Kids app is available for download now via the AppStore for iOS and Google Play for Android devices. You and your kids can try it out for free for 30 days with a subscription rate of Php 129 per month after the trial period. You can also watch out for exclusive offers and special subscription rates from Smart.

Em is MomCenter’s editor and a doting mom to a decisive yet sweet daughter. When she doesn’t have her hands full of motherhood, she moonlights as a geek and bibliophile. Follow her mom-adventures via her Instagram.