It’s been almost 4 years since I last breastfed when I gave birth to my youngest. And, understandably, a lot of mommy products have been developed and released since then. One thing that piqued my interest when I was browsing for baby products before I gave birth was the Haakaa. A well-reviewed breast pump that doesn’t need plugs, wires, and is made of just one (or 2) components, this I have to try, right? Ten months and hundreds of breastmilk bags later, here’s my testimony on how the Haakaa worked out for me.

What is a Haakaa?

Haakaa is a silicone breast pump produced by a 100% family-owned company in New Zealand. It offers environmentally-friendly and safe baby products that are said to be safe for both parents and babies, functional, and even stylish.

The Haakaa breast pump is made of just one or two pieces of silicone: the main pump and the cap. They form a vacuum and suck the milk out of your breasts, sort of like a non-electric and hands-free pump.

How to use a Haakaa?

Since my youngest graced the world a few weeks earlier than expected, I have to admit that I was clueless the first time I used my Haakaa. My baby had to say a few weeks in the NICU and when the doctor gave us the go-signal that she can cup feed a week later, I decided to get the Haakaa so I can build a breast milk stash for her. But no worries since using the Haakaa is also quite simple as I was able to get the hang of it even without a Google search. Here’s how:

Reasons why I love the Haakaa:

However, do note that moms are advised to put off pumping until 6 weeks postpartum (unless necessary) because doing it early can lead to oversupply. 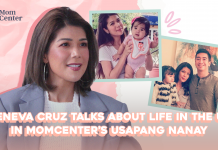